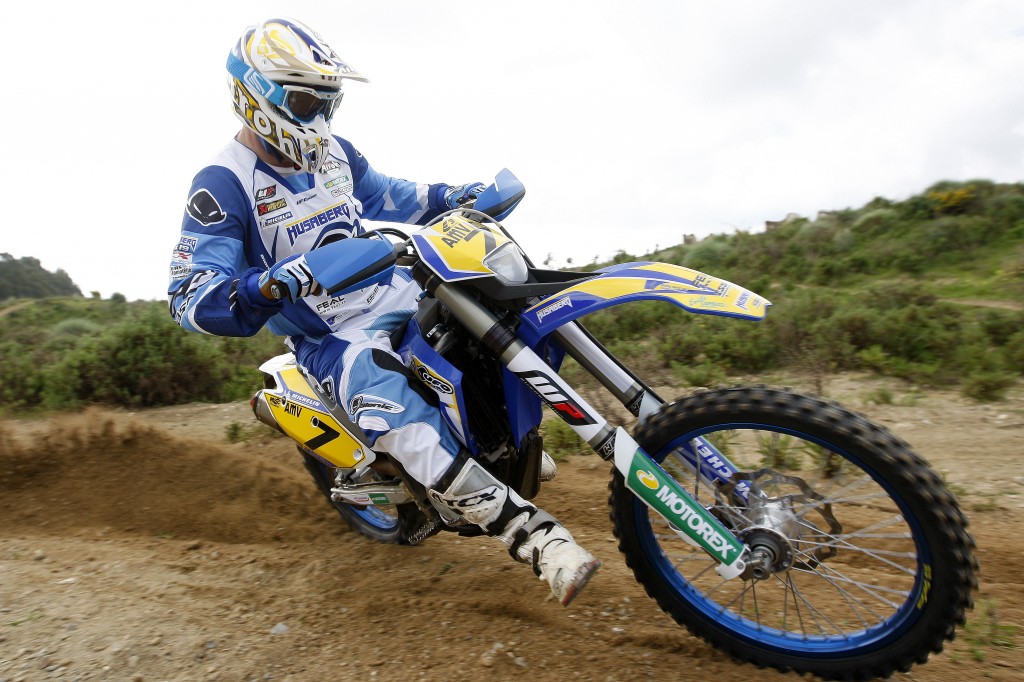 IGLESIAS - The rain is definitely the surprise guest of this beginning of season on MAXXIS FIM WORLD ENDURO CHAMPIONSHIP. During the first day of the GRAND PRIX SURFLEX OF ITALY competed this Saturday in Iglesias, the stars of world enduro had to wipe some scattered showers. Before it becomes slippery, the Sardinian ground however did not miss piquancy, mixing hard ground and stone through mountainous postcard landscapes. But with relatively tight pointing times on the two long portions of liaison, which put rhythm into the 3 laps of race, the best enduro riders of the planet did not have time to visit this fantastic area.

As in Portugal and in Spain, riders started the weekend by the now on "traditional" KTM SUPER TEST on Friday evening. They clashed per series of two in a stressing following race, on a typified motocross terrain. One of the specialists of the indoor races, Italian Fabio MOSSINI (ITA-HM) wins this prologue. He is the fastest man of the evening in front of Christophe NAMBOTIN (FRA-GAS) and Ivan CERVANTES (ESP-KTM).

On Saturday, the small engines of the ENDURO 1 were the fastest of this first round. And in spite of some mistakes in the first Enduro Test, Mika AHOLA (SF-HM) made of this sector his playground. Over the fifty total minutes of stopwatches, he wins with a solid advance of 45 seconds. The second place of E1 returns to the most Italian of the Frenchmen, Husqvarna factory rider Antoine MEO (FRA-HVA). The 2008 best rookie manages to dominate Simone ALBERGONI (ITA-KTM), always sensitive to the pressure when he runs his national Grand Prix.

In ENDURO 2, of course the victory is for Johnny AUBERT (FRA-KTM), but the Frenchman signs certainly his most difficult success since the beginning of season. The reigning champion imposes himself comfortably with a huge gap 1 minute 9 seconds, but he kept an eye on the times of the other categories and noted that he conceded seconds in the Enduro Test. This famous "linea" is precisely the timed portion where Bartosz OBLUCKI (POL-HVA) found an encouraging second place, by showing surprising qualities of self-control. The other good news is the third place of Juha SALMINEN (SF-BMW), who offers to BMW a first world podium this season, 1.13 second behind Oblucki.

Juha Salminen : "Today it was pretty tight in E2. We made some progress during the break, and I also improved my riding. I still make too many mistakes, but I'm happy."

In ENDURO 3, the bad series continue for David KNIGHT (GB-BMW). The rider from Isle of Man K.O. in the Enduro Test prefers to give up. In special tests sometimes dry sometimes slippery, Sebastien GUILLAUME (FRA-HVA) showed himself as the finest pilot. After a beginning of season in ambush behind Cervantes, the Husqvarna factory rider signs a victory with 5.99 seconds of margin over his first adversary.

Sebastien Guillaume: "I make a very good operation for the championship. I made my race without taking care about times. The team announced it to me at the end of the second lap. They said that I was leading by 10 seconds. From this moment, I put myself a little pressure and I did not ride very well in the last two special tests. It is sure I'll keep this strategy tomorrow. Today it was necessary to ride clean to find adherence on the back wheel. I know how to do and that paid. With such a long Enduro Test, about 11 minutes, we cannot attack all the time, the physical would not follow. It is a vicious special test. "

The French riders particularly appreciated the Sardinian conditions just like Christophe NAMBOTIN (FRA-GAS) who steals the second place of E3 from Ivan Cervantes in the last lap for 4.77 seconds. Among Juniors, his compatriot Jérémy JOLY (FRA-HM) wins. The HM HONDA rider managed to dominate Oriol MENA (ESP-HSB) whereas we thought the leader of the championship was unbeatable this season.