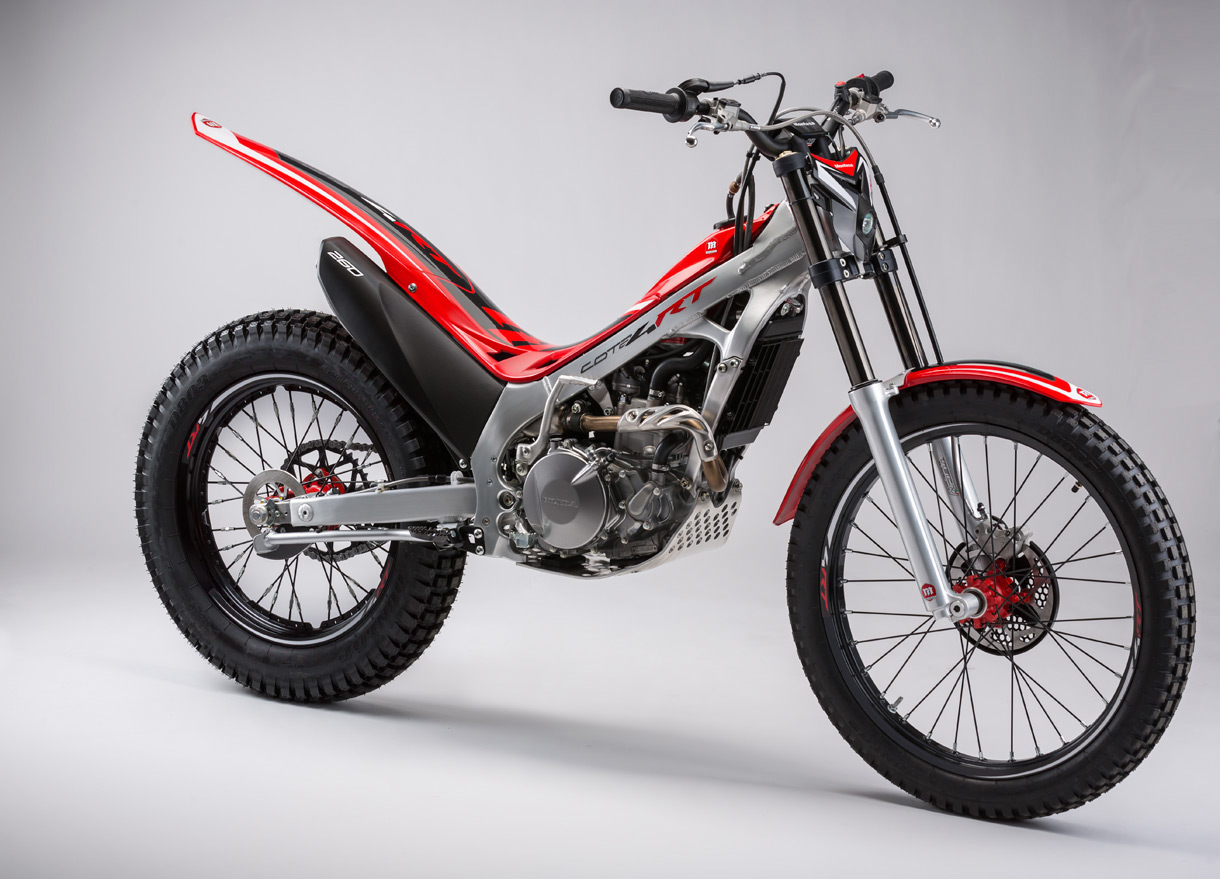 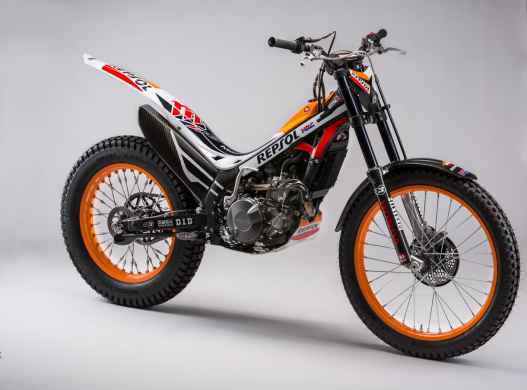 Ever since the release of the 260 model in 2014, Montesa has continued to introduce significant improvements in all its trial models.

Montesa will continue to commercialize the Cota 4RT260 and the Race Replica as we know them, the main improvement in their 2016 versions being the increase in power thanks to the adoption of a new fuel pump which gives the motorcycle more fuel flow. This element, along with the new mapping of the ECU*, gives the motorcycle a consistent power curve especially in the low to mid ranges. In addition to increased power, the reduction of the engine braking when closing the throttle make the motorcycle feel lighter and easier to control. The chassis has also been improved by repositioning the foot pegs, now lower and more backward, making the overall weight of the front axle lighter.

Among other improvements, the new mount of radiator fan, designed to evacuate dirt, pebbles or any object, avoids any possible blockage of the fan itself.

Another noticeable upgrade of the 4RT260 model is the adoption of all improved Dunlop D803GP tires, capable of incredible traction. The features of these new tires also make the motorcycle more responsive and make the front axle lighter.

The 4RT260 keeps its colour red, but now features more details in white giving it a more modern look.

The Race Replica is also fitted with a new Showa rear shock, used to increase the levels of agility and stability as well as giving the more range in the spring preload adjustment.

Like in the 2015 model, the Cota 4RT260 model also comes with a supplementary seat for soft trial or trip trial. The seat is easy to remove and includes a space to store various objects. This new element gives the motorcycle more versatility, expanding the possibilities of its use.

*The versions of the models manufactured for exportation, called Full Power (for exclusive competition use), feature all these novelties as well as an ECU with a double ignition map activated though a switch on the handlebar. This way, the rider will be able to select a second map for lower grip conditions on top of the standard one.

The Cota 4RT260 and Cota Race Replica are manufactured exclusively and for a worldwide distribution at the modern Montesa Honda facilities located at Santa Perpètua de Mogoda, in Barcelona. Worth mentioning is the fact that in an effort to ensure the preservation of the brand’s high quality standards all the processes of welding, assembly of the engine, plastic injection, manufacturing of the fuel tank and swingarm, as well as the aluminium frames is all done at these facilities.

Based on the trial enthusiast’s new priorities, the Cota maintains its original trait features: an advanced 4stroke PGM-FI technology and a light aluminium frame.

At the same time, to increase the Cota’s competitiveness against the popular 2stroke mechanics, the new model has inherited the power plant from the 2014 model with a few upgrades and with a displacement of 260cc that presents a clear improvement in its performance.

To fulfil the expectations and needs of our current customers, as well as attracting a whole new set of clients, Montesa is continuing to commercialize two versions of the Cota 4RT model, the 4RT260 and the Race Replica.

Cota 4RT260: A model developed in conjunction with the Repsol Montesa Honda team that, maintaining its high quality and excellent performance, offers an affordable alternative to the 2stroke motorcycles.

Cota Race Replica: For more demanding customers, for those that seek a highest quality product, the Cota Race Replica offers the exclusiveness of its superior equipment as well as the image of the motorcycle mastering all the world competitions: the Motesa Cota 4RT ridden by the talented riders of the Repsol Montesa Honda team, Toni Bou, Takahisa Fujinami and Jaime Busto.

Much like its predecessors, the production of both versions of the new Cota 4RT will take place in the modern Montesa Honda facilities, located at Santa Perpètua de Mogoda, in Barcelona, insuring the highest quality standards that characterize the Cota 4RT model.

Both versions of the new Cota 4RT, the 4RT260 and the Race Replica, have a modern and fluid style. This year the 4RT260 incorporates new decals and decoration, giving the motorcycle a more modern and sportier look thanks to the combination between the classic colour red and the details in black and white. Red is also present on the hubs of the wheels, creating a perfect combination with the beautiful black anodized rims.

The fuel tank itself also remains untouched keeping its slim and compact shape and enough capacity to be able to enjoy a long day of trial.

Meanwhile, the Race Replica inherits the powerful image of the motorcycle dominating the world championships.

The 4RT models have always been known for their great quality finish and their excellent components that maintain their properties intact throughout out the years. This is something we have maintained in the new Cota models with the incorporation of the highest quality style and decals.

The new Cota 4RT260 inherits the 260cc engine from the previous season, which already included a redesigned camshaft to adjust the distribution diagrams for a better response from the engine at any range of rpm. In their 2016 versions the Cota will benefit from a noticeable increase in power thanks to the adoption of a new gas pump which gives more fuel flow. This element, along with the new mapping of the ECU*, gives the motorcycle a fuller power curve especially in the low to mid ranges. Another aspect worth highlighting is the reduction of the engine braking, a major improvement already present in the 2014 model’s engine, a feature of the 4-stroke engines that was cleverly fixed by Honda’s engineers by incorporating a crankcase’s gas decompressing system. Through this system, when closing the throttle, the engine braking is minimized making the motorcycle feel more light and easy to control. For the 2016 models the engine braking has been reduced even more, making the motorcycle’s overall feel much lighter.

At the same time, the Electronic Control Unit (ECU)’s injection and ignition map offer better traction, especially on difficult terrains, as well as in the most critical moments such as when you open and cut off the throttle in the middle of a zone. With these features the Montesa Cota 4RT is a very efficient model that provides total control to the rider.

This engine offers an excellent response at low range giving the pilot more control over the engine. It’s a very flexible engine, usable at any range of rpm, with excellent torque values at low to mid rpm ranges up to peak-power. In this sense it’s important to highlight the excellent connection between the throttle control and the rear traction, an essential feature for competitive trial and for which the exquisite functioning of the PGM-FI electronic fuel injection system is of vital importance.

One of the main novelties of the 2016 models is that the front end has been made much lighter by repositioning the pegs, now lower and backward which allows the rider to position himself more towards the back and therefore gives him more control over the motorcycle. The wider pegs give also the pilot more control as well as a better riding feel. On the other hand, being wider they accumulate less mud and maintain a higher level of adherence. Furthermore the pegs have a certain capacity for adjustment through a simple change of thickness plates, allowing the pilot to change his position slightly forwards or backwards.

Another important innovation made exclusively for the 2016 4RT260 model is the adoption of the all improved Dunlop D803GP tires, capable of incredible traction. The features of these new tires also make the motorcycle more responsive and make the front axle lighter.

Both the Cota 4RT260 and the Race Replica rely on a light aluminium frame and swingarm with a proven reliability and performance.

In the Race Replica model, the frame-swingarm assembly has the same anodized black colour as the of the official Repsol Montesa Honda Team motorcycles.

In the 4RT260 model, both components have a formidable polished aluminium finish. A treatment that shows off the beauty of the lines and the perfection of the weld seams proving the high quality of the model.

Race Replica: The model maintains the prestigious high quality set of front and rear SHOWA suspensions, a leading brand in the world of trial motorcycles. In the 2016 version a new rear Showa suspension is used to increase the levels of agility and stability as well as giving the more range in the spring preload adjustment.

Cota 4RT260: Conscious that not all the trial enthusiasts need the supreme quality of the SHOWA suspensions present in the Race Replica model, the Cota 4RT260 model has a set of high quality suspensions at a much more affordable price. The front suspension is manufactured by TECH, whilst the rear end uses a light R16V multi-adjustable damper. Both manufacturers rely on a vast experience providing suspension sets to a varied clientele of trial motorcycle producers. However, Tech and R16V and the more than experienced Montesa Honda rider, Amós Bilbao, collaborated throughout various days testing the suspensions in trial tracks and areas to find the most appropriate setting for a machine with the Cota 4RT260’s characteristics.

As a result the Cota 4RT260 presents a set of very efficient suspensions that give a lighter feel. With these suspensions, the Cota 4RT260 is able to absorb the irregularities of the terrain easily and its adjustability gives the rider the option to set them on a more Racing setting or one that offers more retention and comfort.

In 2015, both the setting of the front fork and the rear suspension were revised. On the front part, the new springs were made more progressive providing a better response and comfort without losing the feeling of lightness. As for the rear suspension, the hydraulic damper adjustment sensitivity was increased to achieve a better setting capacity. Also, the rebound and compression damping can now be adjusted manually, without the need of extra tools.

If one of the advantages given by the adoption of the PGM-FI Electronic Fuel Injection system is the auto-adjustment of the carburetion to the different meteorological conditions, the more demanding riders will be able to vary the ignition and fuelling maps through an optional HRC kit and the help of a laptop.

The kit is offered as optional equipment for racing and is composed by:

The Race Replica version features a set of front brakes that incorporate a 4 piston monoblock caliper, making the braking more efficient and powerful. Both versions, the Race Replica and the 4RT260 feature Braktec brakes.

Both models maintain their high quality equipment, like the advanced digital ignition system without battery which powers, among others, the ignition system and the ignition coil. Also worth noting is the bank angle sensor which switches off the ignition when the motorcycle is laying on the ground or when it is at an inclination superior to 65º for more than 7 seconds. This device minimizes the expose to risk of the rider as well as protecting the engine, especially in situations where the engine can remain revving.

The wheel rims keep their design of 32 spokes and the rear one the innovative system that incorporates central adjustment spokes, allowing a significant weight reduction, an easy maintenance and the mount of Tubeless tires, which again reduces the weight of the motorcycle.

Just for the Race Replica model a highly exclusive kit of carbon HRC parts is offered. It’s composed by:

The 4RT260 model comes with an optional headlight visor for exclusive racing use.